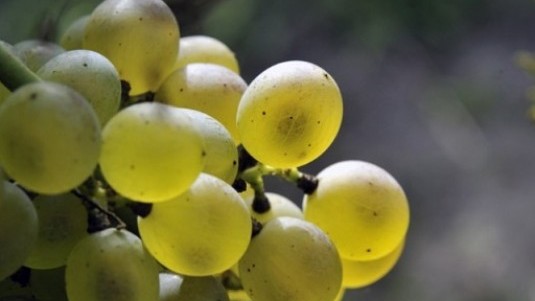 Falanghina is for many the standard-bearer of the region of Campania. And while the wines it produces differ depending on where they are made, all have the distinct imprint of the varietal.

The quote in the title is not mine but from Luigi Veronelli, who coined it during an important conference on Campania wine in 1990.

Although authentic and precious, this varietal risked decline quality-wise despite its ancient and glorious history. Fortunately, enologists and producers have for years now re-evaluated it and brought out the true nature of this “previous gem ”. The first producer to believe in the quality and potential of this grape variety was Leonardo Mustilli who in 1979 bottled the first single-varietal Falanghina and the rest is history.

Falanghina is exclusively a Campania variety and the first mention of its existence was in 19th century agricultural studies that hypothesized it originated in Magna Graecia and was introduced to Italy by settlers from the ancient Greek region of Thessaly.

There are diverse theories on the origin of the varietal’s name with the most accredited being that it derived from the Greek word falangos, which refers to the wood poles that support the grape vines. This system of vine training is still used in some parts of Campania and is referred to as puteolano, in reference to the Naples suburb of Pozzuoli. Frojo and Fiorito wines are made from the ‘flegreo’ grape which was the ancestor of the one used to make Falerno Bianco (white) – Falernum Gauranum – today called Falernina which is probably a modification of Falanghina.

The grape has two areas of origin - Taburno and Campi Flegrei – which produce clones that distinctly differ in regard to shape, size and varietal imprint.

Falanghina is without a doubt the most widespread white wine grape found in the Campania and the undisputed queen of wines produced in the region where it is considered to be its ‘standard-bearer’.

There are some areas in the region where it is cultivated ungrafted, in particular in the zone of Campi Flegrei where the composition of the volcanic soil – with it acidity and loose density – inhibited the reproduction of the phylloxera parasite and thus protected the vines there from the plague that hit European vineyards in the second half of the 19th century.

Falanghina is a robust and consistent grape that has the advantage of being extremely eclectic, thus allowing it to express the characteristics of the territory in the aroma including those of the soil, the climate and the rich biodiversity found in the region.

Although the wines made from this grape different from area to area, when they are young they share distinct traits including notes of banana, pineapple and green apple in the bouquet. When they age, on the other hand, they take on very personal and identifying characteristics. For example, those from the region’s interior develop aromas that are more floral, mentholated and balsamic, while those from the coast have notes that are citrusy and vegetal.

Depending on the winemaking methods employed, Falanghina wines have different classifications or appellations, both D enominazione O rigine C ontrollate (DOC) and Denominazione Origine Protetta (DOP or PDO). These include: Falerno Bianco and Galluccio, Sant’Agata dei Goti, Sannio, Capri, Campi Flegrei, Vesuvio, Peninsula Sorrentina, Costa d’Amalfi and Irpinia. We have tasted different ones from different vintages and here present ten which stand out for having unique characteristics.