The 50 years of Castello del Trebbio 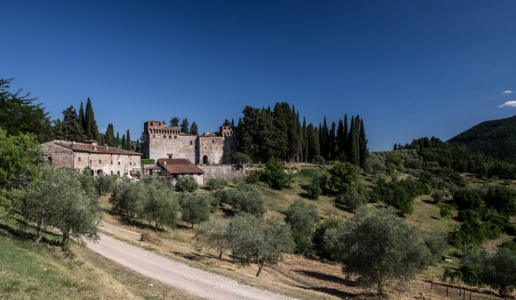 Bought by the Baj Macario family in 1968, the castle today is at the heart of an estate producing wine and olive oil and offering hospitality. It is run by Anna Baj Macario and her husband Stefano Casadei.

The sunset made my arrival at Castello del Trebbio, at the gates of Chianti Rufina, very suggestive. Although somewhat isolated, it is sufficiently near Florence to not seem like the middle of nowhere and a dozen or so kilometers from Pontassieve, on the Santa Brigida road. The castle was built in the 12th century but was “never important enough to be destroyed” (according to the owners) even if was the stage for plotting the Pazzi Conspiracy to eliminate the Medici family, who ruled Florence and were the sworn enemies of the Pazzi family who owned the castle.

Rather that dwelling on its historic past here we will focus on its current reality and more recent past, which began when the Milanese Count Giovanni Baj Macario bought his young Austrian wife Eugenia Spiegel (40 years his junior) this Tuscan castle, the gift from a man in love and a place to relax in the Tuscan countryside. 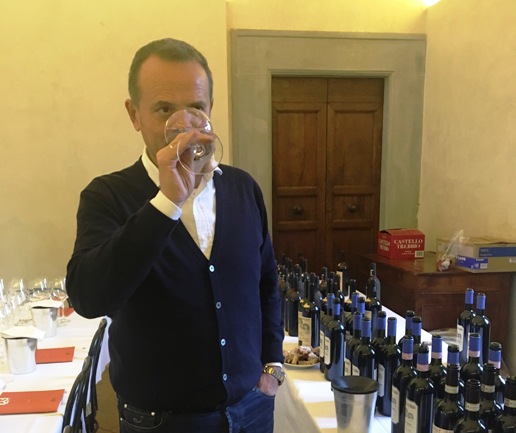 Although these were changing times, with the end of tenant farming and exodus from rural areas, things were different in Trebbio and it was possible to engage the fantasy of living in a castle and becoming Chianti winemakers. The count’s fantasy is now a business managed by his daughter Anna and her husband Stefano Casadei with the help of their children. Their first offspring manages the “amphora” project, another is in charge of the hospitality activities and the third is learning the wine trade in California. Castello del Trebbio is part of the DCasadei Group that also owns a property in Sardinia, in Sarcidano, and in Maremma. The group adheres to a new ethical protocol called “BioIntegral” (a registered trademark) which involves biodynamic farming (aside from wine and oil they also produce saffron and spelt), sustainable architecture and energy use, and space for animals (from horses to work the land to geese, speed and cows, bees and earthworms) along with a focus on biodiversity. In short, total respect for nature.

Stefano offered us an opportunity to look back at the history of the estate’s Chianti Riserva, their top-self wine around which produce is centered, beginning with vintage 1971 (it was then labeled as Chianti Riserva DOC Trebbio) and ending with what is now labeled Chianti Rufina Riserva DOCG Lastricato, vintage 2013. Over the years, the appellation has changed as has the productive style, while maintaining the typical and distinct characteristics of Rufina Chianti.

In 1971, tenant farming still existed in Trebbio and thus the wine was made by the farmers, who had to deal with a growing season that was hotter and drier than usual. The blend was the classic one of the era: Sangiovese together with Canaiolo, Ciliegiolo, Colorino and Trebbiano. The wine has an orange color with notes of leather, damp earth and spent fireplace but it still holds up thanks to a distinct acidity and subtle tannins. A clear portrait of the way things used to be.

In 1979, 50% of the vineyards had been renovated while tenant farming was almost non-existent. The growing season was cool and wet. The wine has a pale, garnet color with a rather rustic aroma with green notes and those of ash. The mouthfeel is vertical with an almost scratching acidity but flavorful and persistent. 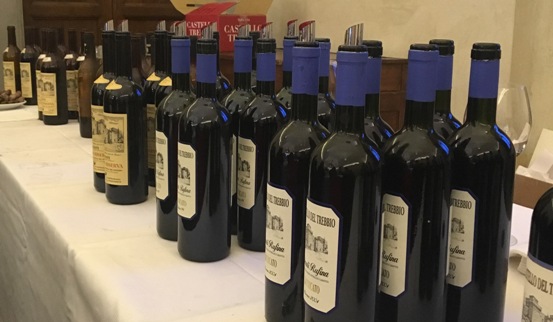 The 1983 Riserva was labeled as a Chianti Colli Fiorentini, a classification that lasted until 1991 when it became part of the Chianti Rufina appellation, although the first vintage of Lastricato Chianti Rufina Riserva was 1997. In 1983, the last tenant farmers, the Tamburini family, left but by then all 40 hectares of vineyards had been replanted maintaining a small part remaining white grapes. The season was very hot and dry and this was evident in the wine’s aroma with its scents of prune jam, dark flowers and leather, while the  mouthfeel was more voluminous but still had a high acidity, a nice persistence and an aftertaste of slightly bitter Marasca cherry.

1989 was a difficult year for the family: the count died (his wife would follow a year later) and the weather was poor. These difficulties are reflected in the wine which is surly, contracted and testy to the mouth.

The family inheritance was settled in 1995 with Anna and her husband Stefano buying out three siblings (Albert stayed on) and they took total control. It was a good year weather-wise and the wine showed it. It has a dark and bright garnet color and a full aroma with scents of cherry, turmeric and underbrush with just a hint of old wood. The lovely mouthfeel is very fresh with a nice body and gritty tannins typical of Rufina. The persistence is good and the finish fruity. 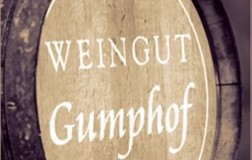 My how Forrest can run

The best Grignolino in the world 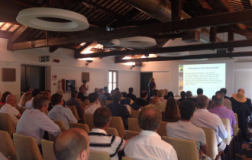 Pinot Grigio at the event horizon 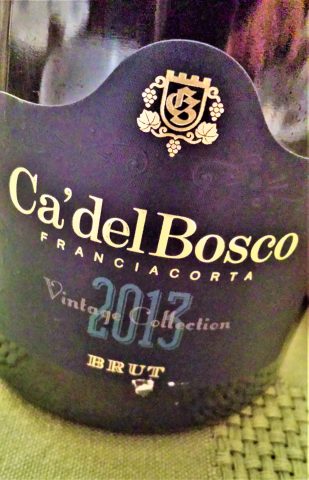