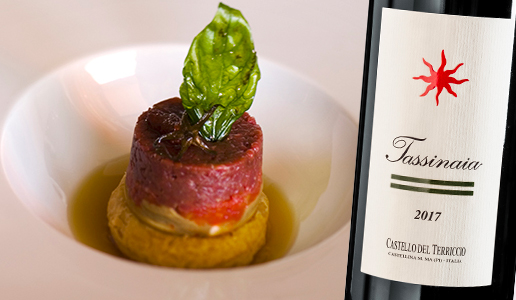 This recipe from Chef Giancarlo Perbellini, of the star Perbellini restaurant in Verona, is paired with a Tassinaia 2017 Castello del Terriccio.

Blanch the tomatoes, remove the peel and seeds, chop finely, salt and let the pulp drain for around an hour.

Cut the eggplant in half, make some incisions and season with EVOO and salt and bake in a ventilated oven at 195°C for 25-30 minutes. Remove them from the oven, peel and let it drain in a sieve for 2 hours. Blend the eggplant in a mixer together with a trickle of EVOO, a clove of blanched garlic, soya sauce and tabasco to create a thick sauce.

Finely chop the filet and season it with EVOO, salt and pepper.

Using a 6cm cylindrical mold, create a layer of tartare, then one of tomato, then the eggplant cream and finally one of goat cheese.

Turn the mold upside down and empty the contents on each of the cooked dough discs and serve in a bowl adding, at the last moment, two demitasse cups of tomato beef consommé.

Vintage 2017: Autumn 2016 started with rains and temperatures above the seasonal average, December and January were very cold with freezing temperatures during the day, accentuated by strong northern winds and no rain. Except for some sporadic rains, spring was characterized by a particularly dry climate. In mid-May the temperatures were often above seasonal average. Summer months were characterized by sunny days and hot temperatures. The veraison began in mid-July and the climatic trend anticipated the maturation of the grapes. The early harvesting that began at the end of August and lasted until the end of September. Healthy, crunchy and well-ripened grapes produced musts that are not excessively rich in structure, characterized by a good acidity which supports the higher degree of alcohol of this vintage.

Vinification: Extremely soft pressing and destemming. Fermentation in steel vats at controlled temperature, with maceration of the grapes for about 9-12 days for Merlot and 12-15 days for Cabernet. During the fermentation process pumping over of the grapes and délestage. Maturation takes place in separate masses for each variety, in second and third passage French oak tonneaux  for 16 months. After assemblage and bottling, the wine rests in bottle for 12 months before release.

THIS RECIPE IS OFFERED BY CASTELLO DEL TERRICCIO