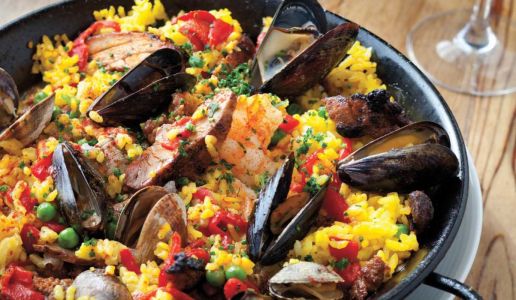 Paella is a popular and traditional Spanish dish that is prepared using ingredients available locally: fish, meats and vegetables. We pair this recipe with a Sicilian white wine: Saline Bianco Colosi.

The oldest version of paella would appear to be from the area of Velencia, where available fresh vegetables and home-raised rabbits and chickens were readily available to families. Along the coasts, on the other hand, they used fish and shellfish. Olive oil being common to the Mediterranean was used in every version of this tasty dish.

Among the hundreds of recipes, here we present one using seafood and shellfish, which purists may dismiss as being too “Italian”.

The name paella derives from the one used for the two-handled pan used to cook it in. Paellera, on the other hand, is the name for the woman who cooks it.

To prepare this dish it is important to have the right pan which should be 38cm in diameter, preferably with two handles, because the ingredients and rice must be cooked uniformly, close to the heat and without stirring.

Flush the clams by placing them in 2l or water with 70 of salt. Change the water when you see sand settling on the bottom, repeating 2-3 times.

Scrape and clean the mussels and remove the ‘beard’.

Prepare the broth: toast the shellfish heads in a pan for a couple of minutes at a high heat stirring them with a wooden spoon and crushing the heads to extract their juice. Add an onion, a bay leaf and 1½l of cold water and simmer for around 30 minutes. Let the broth sit and cool then filter.

Put in a trickle of EVOO in a broad paella pan and add the chili pepper and a garlic clove and then the clams and mussels to open them up, removing them one by one as they do. Shell most of them while keeping some intact for garnish.

Add the broth to the pan with the water from the shellfish, filter with gauze to eliminate any sand and other impurities.

Make a subtle brunoise by finely chopping the onion and garlic, cutting the pepper into strips and peeling the tomatoes.

Put an ample amount of EVOO in the paella pan and fry the cuttlefish. Add the chopped onions and garlic, let then cook for a few minutes and then add the peppers and, after a few minutes, the the peas and tomato brunoise.

When most of the tomato water had evaporated add the rice and toasted it slightly, mixing frequently.

Cover everything with boiling fish broth, add the saffron that has been dissolved in a demitasse cup with some broth, the paprika and shelled clams and mussels.

Cook at a high heat for around 10 minutes without ever stirring. When it is half-done decorates with the clams and mussels that were kept aside.

Turn off the heat when the broth has been absorbed and the rice is loose.

Cover and let sit for 5-10 minutes to allow the rice to be fully cooked.

Bring the paella to the table in the pan it was cooked in.

Straw yellow color with green hues. Intense aroma with strong hints of ripe fruit (peach) and typical sensations of the mediterranean scrub. Fresh and salty at the palate with intense flavor of white peach and a joucy finish.

Wine-making: harvest time half September; no maceration, soft pressing of the grapes, static clearing of the must and fermentation at controlled temperature of 16°C in stainless steel. 3 months bottle ageing.

THIS RECIPE IS OFFERED BY CANTINE COLOSI 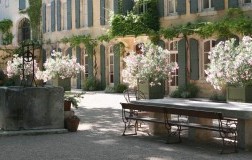 On the border with Provence 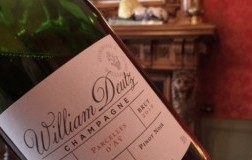 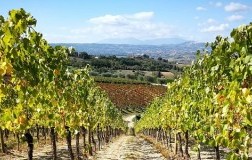 Fiano and Greco, the Riserva is born 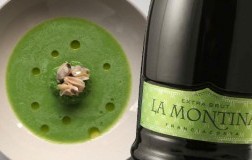