From the Palace to Vinicolo

A characteristic street in Caserta’s historic center leads directly from the entrance to the Royal Palace designed by Vanvitelli to a restaurant frequented by those who appreciate good food and wine: Al Vinicolo. Although it only opened eight months ago, the competence of the staff in regard to food and drink, along with the passion and enthusiasm they all share, has in an only sort period time brought it the success it deserves. The place has two faces to it: it is a Wine Bar that opens at 5pm and offers a selections of wines by the glass accompanied by finger food, while at 7:30pm it becomes a restaurant with two dining rooms that can seat 40 people.

The atmosphere is pleasingly informal with a décor of warm tones that create a relaxed setting, enhanced by the choice of background music. The hospitality of Graziella, Doriano and Marco – along with the attentive service – allows you to have a long and rewarding meal. In full view – separated from the rest of the restaurant by a large glass window – is an enormous grill where you can watch the meat and fish being prepared. The cuisine is light and immediate using seasonal foods.
The menu is for the most part traditional – with a lot of dishes based on cod – but there are some creative ‘surf ‘n’ turf’ offerings. As a starter the polpette di baccalà alla Luciana (cod fishballs) are a must and also good is the gambero scottato su coulis di pane viola (brazed shrimp on a purple bread coulis) or, if you don’t want fish, the classic mozzarella di bufala campana servita con Parma (Campania buffalo mozzarella with Parma ham).

For dessert, aside from the seasonal millefoglie con Chantilly al limone (napoleon with lemon Chantilly cream) and the Ciliegie di Pantalatone (Pantalatone cherry), there are mousse or semifreddi di frutta (fruit mousse or semifreddos).
The wine list is fairly basic and selected by sommelier Marco Martufi who chose to give ample room to local wineries along with other domestic and international wines. Craft beers are available along with a small selection if distilled spirits. Al Vinicolo also hosts encounters with producer and appreciation courses for wine, olive oil and beer and on some nights they offer theme dinners with food, music and culture from other countries. 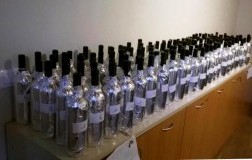 From a big winery on Lake Garda 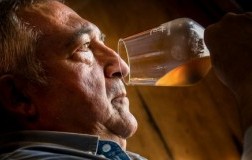 Bubbles in the sun 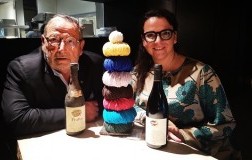