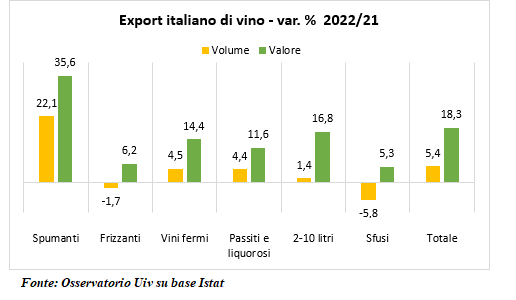 Exports for Italian wines rose in the first quarter of the year (+18.3% in value), according to the Italian Wines Union (UIV). The boom for Italian sparkling wines continued, led by Prosecco, and by the end of the year exports are expected to hit 1.1 billion bottles.

Amid a host of troubles, from Covid that seems to be picking up again and the dangerous repercussions from the war in Ukraine, together with ongoing drought and runaway inflation, there appears to be some good news. The latest issue of Corriere Vinicolo, the organ of the Italian Wines Union (UIV), reported that Italian wine exports are doing very well. In the first quarter of 2022, turnover reached 1.7 billion euros, a significant jump from the same period last year, which itself had been a record.

The great success for Prosecco is by no way waning (+40% in value and +11.7% in average price) but other wines are also doing well with very positive results for still wines despite a predictable freeze in orders from the countries engaged in the Ukraine conflict.

At the same time, producers are facing situations that are quite critical. They are having difficulty in obtaining glass and packaging materials and the cost of energy is sky-high while the ongoing drought is creating very serious problems and this could lead to a rather significant decrease in production.

Nevertheless, no one expected to see an 18% jump in exports. Of course, the data needs further and careful review to see if, for example, the average price per bottle exported is also rising, which would indicate a better performance for Italian wines on the international market. In any case, everything would appear to indicate that no one should complain and things are going surprisingly better than expected. And this is good news indeed at a time like this. 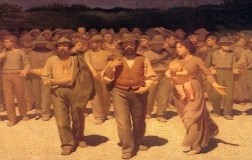 An enemy of the people 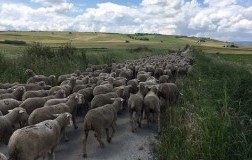 That cultural heritage that is transhumance 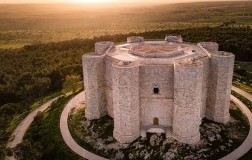