While it may not yet have a strong wine identity, Sicily is deeply rooted in the heart of wine lovers who identify its wines with the sun, generosity and concentration. Sicilian wine’s current success is thanks to several large estates that have brought their wine to tables around the world.

This is an island that does not have a wine focal point, even if Etna has everything its needs to become one in the near future, and at the same time it lacks facets even though it is host to so many different microclimates.

Wine lovers generally focus on eastern Sicily but today we will look at the Regaleali-Tasca d’Almerita estate in Sclafani Bagni, situated in the center of the island. It is a magnificent reality which ideally encompasses all of Sicily and its opposite.

The area has, of course, a lot of sun but also snowy winters, marked temperature variations and ample rainfall. The Regaleali estate is the productive heart of the Tasca d’Almerita and is comprised of a total of 549 hectares of land of which 367 are vineyards and the rest olive groves, pastures, lakes and forests. All this at altitudes that range from 400 to 900 meters above sea level. The vineyards include 76 hectares that are both alberello and espalier-trained and grow in incredibly different soils. A 1999 geological study of the estate found 12 different combinations of soil in regard to characteristics and fertility. These include plains at the bottom of a valley rich in river sediments, a soil very suitable for distinct white grapes be they natives ones (like Catarratto) or French varietals (Chardonnay and Sauvignon). The rolling hills range from 450-600m above sea level and have a mostly clay soil rich in salt, all adapt for red grapes including the indigenous Nero d’Avola, Perricone and Nerello Mascalese. Another area has a terrain that is steep to very steep ranging in altitude from 600 to 750m and where rocks often jet out. The soil is rich in chalk and leans towards being alkaline. Here they produce fresh and fruity white wines from native grapes (Grecanico and Insolia) and, at higher altitudes, aromatic grapes like Moscato and Traminer.

Regaleali white wines have great body and bold aromatic expression, as well as a freshness one would not expect in Sicily, while the reds are austere with a nice acidity that allows them to age.

Tasca d’Almerita is considered a model estate for the experimentations it carries out, for the way it has introduced innovative methods for winegrowing and winemaking and for having introduced non-Italian varieties while at the same time enhancing the value of native ones. All this was possible thanks to a tremendous effort that resulted in a vast number of wines varieties which have the advantage of always being good, year after year and without exception.

Among the wines the estate produces, Rosso del Conte has always been considered a showcase wine. It is made with grapes from the San Lucio vineyard, the oldest in the Regaleali estate, which has a southeast exposure and is situated at an altitude of between 400 and 500 meters. It is a seven-hectare vineyard where 5.5 hectares were planted in 1959 with a mix of Perricone and Nero d’Avola. Aside from being their oldest vineyard, it is the only one where two different varieties coexist.

At the end of the 1980s, the productivity of this vineyard began to decline, the natural consequence of a plant’s lifespan, and so Perricone and Nero d’Avola from other vineyards began to be added to the Rosso del Conte blend, in particular grapes from the Sant’Anna (planted in 1978) and Ciminnita (1979) vineyards along with the best grapes from other parts of the estate. San Lucio is a magnificent vineyard that has been maintained over the decades by gradually replanting the old rootstocks with new ones and then grafting the old vines on to them. All this is a long and difficult operation also because new root stocks have difficulty growing among old ones.

Tomorrow we will publish the second part of the article together with a vertical tasting of Rosso del Conte. 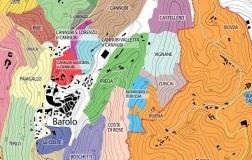 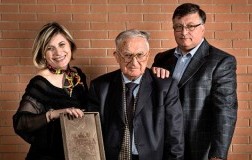 The fertile land of Terredora 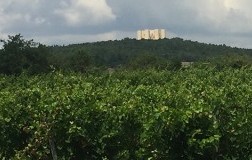 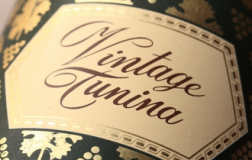