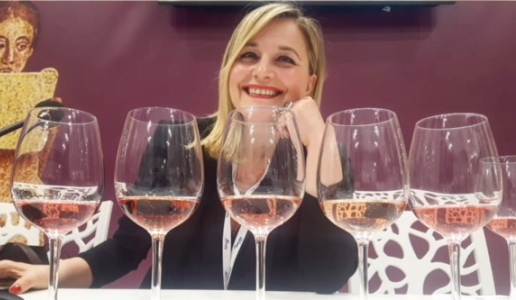 The region of Campania, and in particular the Sannio Beneventano area, is focusing on producing rosé wines, a market trend that is decidedly on the upswing.

Market research data is clear: in recent years rosé wines are back in fashion. There is growing interest in them on the part of Italian and foreign consumers and they are especially in demand among consumers between the ages of 20 and 40 and, in particular, among women.

France is the leading county for rosé production followed respectively by the United States, Germany, Britain, Italy and Spain. Rosé consumption in Italy, however, is relatively low, only 5 out of 100 bottles consumed. This places Italy closed to the bottom of the list for rosé consumption, just ahead of Russia. According to a research study by Co-op, the biggest British supermarket chain selling fairtrade products, rosé outsells Prosecco in Britain and it sales have seen a surge in the past year. Multinational retailer Marks & spencer has put the increase at 100%.

France has set the benchmark for rosé production with the AOC Côtes-de-Provence responsible for 88% of global production from vineyards that stretch 200km between the Mediterranean Sea and the Maritime Alps. The importance of this wine in the framework of world wine production led to the creation of a research center, Centre du Rosé in Vidauban, where different winemaking techniques are experimented with.

Global rosé production has reached 23.6 million hectoliters with 31% from France followed by 20% from Spain. Italy stands fourth for production and second for exports.

The growing popularity of rosé has convinced producers to dedicate more attention to its production and to experiment both in the vineyard and the winery. The result has been a constant improvement in quality.

Campania is a region paying more attention to rosé, especially in the area of Sannio in the province of Benevento.

Benevento is the overall leading winemaking area in Campania and produces over half the wine classified DOCG, DOC and IGT.

This is evident driving on the road that runs through the Valle Telesina that has a landscape unthinkable elsewhere in the region. Kilometer after kilometer of vineyards of native varietals, first among them Aglianico and Falanghina, followed by Piedirosso, Barbera del Sannio, Sommarello, Sciascinoso, Greco, Coda id Volpe, Agostinella, Moscato and other ancient and rare varieties.

Aglianico is the most widespread red wine grape in Sannio Beneventano and perfectly identifies winemaking in that area. With the cultivation of Aglianico, a “bitter” biotype, they produce the best-known and prestigious Sannio wines. First among these is Aglianico del Taburno DOCG, made as a red, a rosé and a reserve wine. And the rosé version was the first Italian rosé to be give a DOCG classification.

The rosé’s color is obtained by letting the must macerate on the red skins for a period than varies between a short and long time. After maceration, the must is separated from the skins and the wine is made like a white wine.

Some rosé is also made by taking must from vats used for making red wine and mixing it in with the white wine but this practices is dying out and is not the case here.

Thanks to the Consorzio del Sannio producers’ association, we were able to taste several wines with different characteristics and chromatic hues but that share a common origin, intriguing colors and a boldness evident from the first sip. 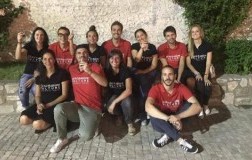 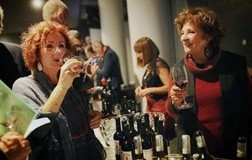 Oltre from Bellaria travels with His Holiness 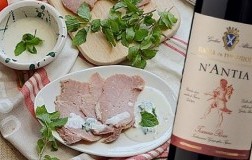