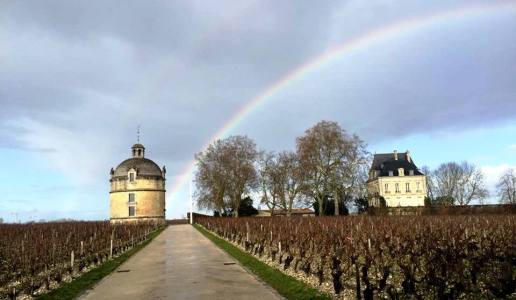 The highpoint of a trip to Bordeaux was a visit to Château Latour and it was an experience that helped to understand the reality of one of the world’s most famous wines more than a thousand words ever could.

Once they achieved economic prosperity by selling their local claret to the English and the Dutch, Bordeaux wine merchants used their fortunes to build country mansions which they surrounded with vineyards. And the area they chose most to do this was north of the city on the left bank of the Gironde estuary: Médoc. Because the nouveaux riche like to show off their wealth, they modeled the architecture of their new mansions on the castles of the Loire valley.

It was the Modern Age.

Médoc today is a flat area covered in low, Guyot-trained vines that have an impressive density per hectare and grow in a soil filled with pebbles, similar to those you can find on a beach. The color of the sky and the alternating rain and sunshine recall the weather of England, while the monotony of the landscape is broken up by elegant villages – Bages, Beychevelle and alike – which are just a side attraction to the world of wine.

I had a 2pm appointment (which took a month and a half of emails to arrange) to visit what is widely considered to be the primus inter pares of all Châteaux du Médoc but arrived at the gate on Routes des Châteaux at 1:35. Despite showing up so early, I managed to finally get their late because the gate next to the one for Latour is that of Pichon Comtesse, where a smiling young lady asked me “which Château?” when I said I had an appointment.

Château Latour was several hundred meters away, towards the estuary, in the middle of the vineyards. The estate is composed of a number of buildings all quite distant from each other. There is a small castle, which I discovered was uninhabited, a tower that in the Modern Age was used to monitor the height of the river and some other buildings situated along the river bank. After going to all of them, in vain, I finally reached my destination. It was a structure that housed the administration and the winey and which was immersed in the vineyards (I later learned that these vineyards produced the best Cabernet Sauvignon). It looked like a pocket-sized monastery, a square structure with an interior courtyard and no parking lot or signs to indicate what it is.

I finally got there at 2:40 and was met by Lisa, the girl responsible for reception, and was taken to a waiting room that looked like the lobby of a big Manhattan hotel. It turned out that Lisa had a degree in enology, obviously from the University of Bordeaux, and she had studied under the late-great Denis Dubourdieu. Lisa told me how Latour recently converted to organic farming methods and was moving towards becoming biodynamic (still not certified).

“We realized that the conventional methods we used in the 1970s and 80s were puting too much stress on the land and so we decided to change”.

“Did the changes in the vineyard lead to any change in the wine?”

“Absolutely not!!” she replied worried she had been misunderstood.

I took a fancy black umbrella with me for the tour of the vineyards where a young man pruning the vines stood up and greeted me warmly with a smile.

The earth underneath the pebbles at Latour seems darker than that in the rest of Médoc while the slightly peat scent in the air is like that of Edinburgh. And the Atlantic is just a stone’s throw away. Each vine, each and every plant seems like it was cared for as if it was unique. And next to each lashing is a spreader of sexual pheromone “which allows us to use less chemicals in the vineyards”.

Bordeaux does not lack sunshine – and fact “in recent years not even warmth”, but it is a rainy area, “even if in recent years we have had some problems with drought”.

Lisa soon realized that I was not just interested in the vineyard. “How important was the 100 Years’ War for Bordeaux?”. “It all started then because it was the English who commercially “created” Bordeaux. In fact, for centuries Château Latour itself belonged to rich English aristocrats or members of the upper middle class, even though it was managed by French”. It is currently owned by François Pinault, one of the world’s richest men. “Mr. Pinault constantly wants to be updated on Latour, even if his many other commitments keep him from being here. His utmost desire is to always make the best wine possible and maintain the estate’s style”.

In the bottling room a reliable-looking woman greets me but pays me little attention because she is holding a magnum of Grand Vin and is busy putting a label on it with the precision and care of a midwife.

After visiting the vineyards and the winery it was time for the tasting room. But will have to wait until tomorrow. 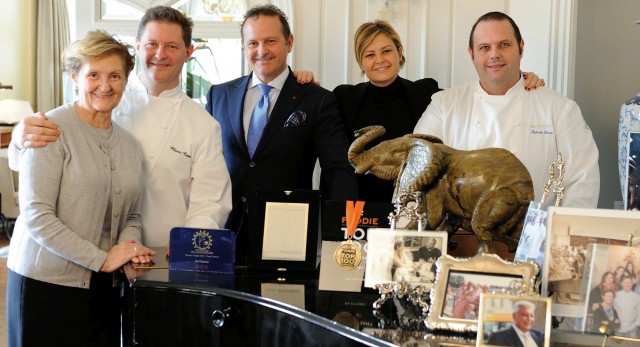